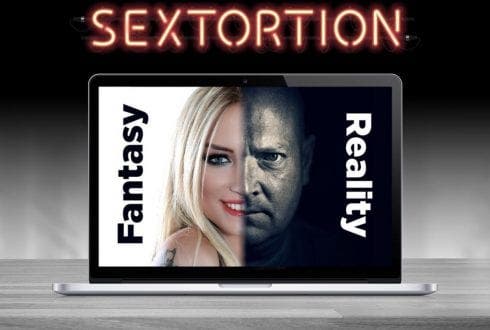 Some time ago a small group of teenage schoolgirls had done something that we could never have known the ramifications of many years later. They had been contacted by people pretending to be young boys, and flirtatious texts were sent back and forth.

The girls were to have no idea that the people sending these texts were actually men from another country. Being young and new to the technology of smartphones, one of these girls began to send naked pictures of herself as her ‘relationship‘ with this boybegan to get more serious, in her young and naive eyes.

Some years later, these pictures resurfaced and the girl who was by now a student at University and training for a career in law had them sent back to her, with a threat that they would be sent to her family and friends. They would even be made available on public forums. The only way she felt that she could stop this from happening was to send 7000$ as requested, to an unknown account.

This girl was devastated, she feared that her career would be over before it had began and so she felt she had no choice but to pay the money. As with most blackmail and extortion, it was never going to end there. She was asked for even more money and things quickly escalated for her. Sadly there was not a good outcome for this girl which is why I feel it pertinent to write this piece.

The word, ‘sextortion’ first became recognised in 2009 when The Institute for Responsible Online and Cell-Phone Communication (iroc2.org) began to warn the general public about this new phenomenon. One of the ways in which they did this was to deliver a series of live events and websites, the best and most informative being www.sextortion.org. 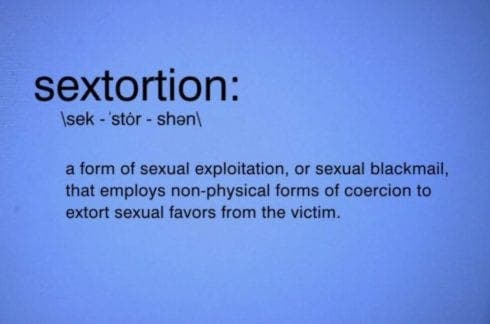 As is often the case, these issues start in childhood, and it is therefore vitally important that we educate our children that they should never send anything electronically that could put them into a compromising position, at any time in their lives. Because we leave digital footprints even when we might believe we have deleted something permanently.

Interpol states there are particular people who are at risk of the crime of sextortion (europol.europa.eu) they are:

vulnerability, either on a relational level (expressions of neediness or youthful-sounding screen names) or on a technical level (lack of online safety skills);absence of or poor parental control;openness to oversharing, including self-generated sexual material;significant amount of time spent online every day;use of social networks and other means of online communication, especially through mobile devices;tendency to befriend strangers online;relaxed approach towards sexualised interactions/communications online;lack of technical knowledge (use of strong passwords, how to deal with suspicious links, etc.).

Whilst we want our children to have a sense of freedom we have to be very vigilant in their use of smartphones, and any other methods of communication that can be accessed remotely. It is not about being controlling, but rather having some parental awareness of what exactly our children are accessing and with whom.

Some adults worry about intimate pictures that they have sent many years ago, to ex partners for example. People can be made to feel very anxious, depressed, alone and afraid of what might happen if they do not comply with the fraudster.

Whilst there is no specific law of sextortion itself, other laws are being used to prosecute offenders. Some of these laws are, extortion, bribery, breach of trust, corruption, sexual coercion, sexual exploitation, sexual assault, child pornography, computer hacking and wiretapping. Whilst it might be a very uncomfortable thought for an adult to relive something they might deem to be a teenage ‘mistake‘, it is important that the people committing these crimes be held accountable. Advice offered by the National Crime Agency (nationalcrimeagency.gov.uk) and Interpol is, to report these offences, they will be taken seriously. People are now being imprisoned for the offence.

HAMPSHIRE CONSTABULARY HAVE RELEASED A VIDEO AS A WARNING ON THE DANGERS OF SEXTING. LINK FOR VIDEO BELOW: